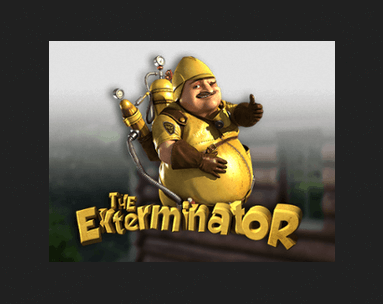 The Exterminator slot is a fun 3D high definition online slot from Betsoft Gaming. The Exterminator pokie has five reels and 30 paylines which can be adjusted as the player wishes. One to five coins can be played per line and each coin can have a value of between 0.02 and 0.50. This makes The Exterminator slot a cheap slot to play, but bear in mind that it is a rather high variance game. This means that small wins do not happen very often, and you can go through quite a bit of your bank roll before hitting anything significant.

All of the symbols in The Exterminator pokies on the World Wide Web are theme based and very well designed. A lot of time has gone into the design of this slot. At the bottom of the scale we have a welcome mat and some tickets. These are worth 15 and 25 coins for five of them in a row. A billboard and the raccoon’s tail are next with 25 and 50 coins for five of a kind. A trap and some rubbish bins make up the mid paying symbols and will award you with 75 and 100 coins respectively. Finally we have our sneaky racoon and the Exterminator who will give you 200 and 500 coins respectively for five of a kind on an active payline.

The Exterminator slot is all about an exterminator who is trying very hard to catch a racoon. The reels are made up to look like a log cabin in a pine forest, complete with tall trees and mountains behind it. The sneaky racoon is constantly moving around, teasing the exterminator who seems way too portly to ever be able to catch him. The exterminator keeps an eye on your reels for you and lets you know when you have a win. The Exterminator slot is a very well designed slot, with lots of animation and detail. The sound track is a unique little tune that plays all the time and may cause you to grit your teeth eventually. 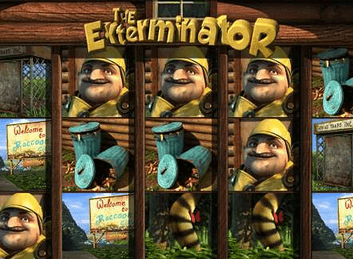 The truck wild is only found on reel four and can replace all symbols except for the footprints and the blueprints. During the sticky wins this symbol will stick with other wining symbols and expand to cover the whole reel once all sticky respins are concluded.

This is quite difficult to trigger as you have to find five or more racoon footprints on the reels. When this does happen a free spins round will be launched in which you will get a random multiplier attached to each spin. This cannot be retriggered.

Five or more of the blueprint symbols found anywhere on the reels will trigger a game where you have to decide where the racoon is hiding. A number of choices will be presented and you simply click on the one you think is correct. Guess correctly and you will receive a cash bonus.