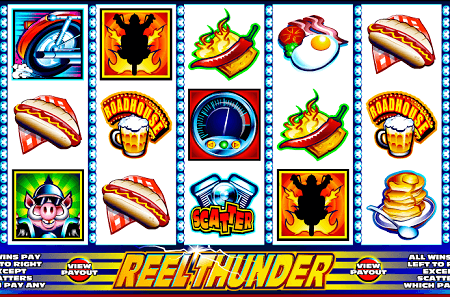 Reel Thunder is a very simple slot. It has almost no special features to mention at all. What it does have is amusing cartoony graphics and bright colours. This is a slot for those who love the pureness of spinning reels and don’t want anything to get in the way of that. Beginners to the slot world may like to take a spin on Reel Thunder as it is cute and entertaining for a while. They may however get bored and wish to move on to any of the other slots out there with more features.

Reel Thunder plays out over the regular five reels, but only has nine paylines. Coin values range from 0.25 up to 2 coins per line that makes Reel Thunder a great slot for those of all budgets. Reel Thunder does not have a progressive jackpot, but its standing jackpot of 10 000 coins is not to be sneezed at.

Reel Thunder is available on desktop or laptop as well as on mobile devices. It runs very well on a smaller screen due to its simplicity. Players can find it either by searching in their browser and paying a Flash version, which does not need downloading, or via their app store. If players make use of the app store they need to be sure that they have enough space on their device as the game will require downloading.

Reel Thunder is a relatively old Microgaming slot, and was created before detailed backgrounds were the in thing. The slot has no background to its reels aside from a blue wavy pattern. The symbols and actual game graphics make up for that though with loads of bright colours and amusing cartoon icons. The sound track is half usual slot machine sound and half original. When winning combinations are formed you can hear the roar of a motorcycle and other unique and rather funny piggy sounds.

Hog on a Hog Theme and Symbols

The whole idea behind Reel Thunder is a pig riding a motorcycle. So literally a Hog on a Hog.  The symbols are all theme based and reflect our piggy’s road trip with things like pancakes, eggs and bacon, a hotdog, chilli and a foaming beer. These food-based symbols are the bottom of the range with pancakes only being worth 50 coins for five of them, and the beer being worth 600 coins for five of them. Next up we have some Hog related icons such as a speedometer, a cruising badge, a flaming biker and a Road Hog. The Road hog is the highest paying with the games standing jackpot of 10 000 coins for five of him.

The slot has only two special symbols to keep your interest, namely a scatter and a wild symbol. The wild symbol is a shiny heart with wings and an exhaust pipe that looks rather like a stereotypical biker tattoo that you would expect a cartoon biker to have on his arm. This shiny heart can take the place of all other symbols in the game except the scatter. This creates the opportunity for the player to hit many more winning combinations. The scatter is an engine block that is quite easily found anywhere on the reels at internet casino sites available now. This will add a multiplier to the total number of coins that you wagered.