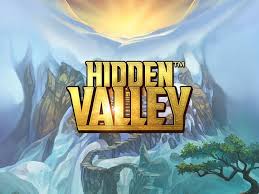 The Hidden Valley video slots game developed by Swedish games studio Quickspin has mystical overtones, with its theme of travellers seeking enlightenment and Shangri-La in the snowy Himalayas, backed up by bright, detailed animations and a relaxed meditative soundtrack. At the same time, the game doesn’t take itself entirely seriously, with tongue-in-cheek touches in the way the medium win symbols are rendered: a wise Sherpa with a mercenary glint in his eye; the wide-eyed blonde hippie girl and the bearded backpacker smoking a ‘roll-up’; a cheerful eagle giving the viewer its best side and a yak with an outrageous hairstyle.

Hidden Valley is unusual in its reel layout. There are five reels, but although reels two, three and four display four rows of symbols, reels one and five display only three. However, with 40 bet lines in a variety of patterns, this arrangement does not effect the game’s ability to produce runs of three, four or five matching symbols, starting at reel one, for a winning bet line. The game’s variety of multiplier bets also enhances the winning potential.

Low value icons in Hidden Valley are standard: the poker symbols 10 through Ace. They are rendered in solid block letters, each etched with its own decorative flourish. The medium value symbols are the aforementioned Sherpa, blonde woman, bearded man, eagle and yak.

Hidden Valley’s unique strength is in its variable wild multiplier bets. The wild icon is a simple tablet with its multiplier value printed on it, but the size of that multiplier is determined by the player. The game offers wild multiplier values of X1-X2 on the lowest level, X4-X10 for players playing the highest bet per line option, and two levels in between. Once the bet and multiplier has been set, the wilds substitute for all symbols except the scatter symbol, and wilds that appear will have a multiplier selected at random from the range available according to the bet. Wilds also arrive stacked, so it is possible for several on one reel to form part of several winning bet lines, multiplying any such wins by the factor displayed.

In a visual pun, the Hidden Valley scatter symbol is a disc that resembles a Tibetan cymbal. Three scatter symbols launch a bonus spins round, but first players must spin an outer wheel to determine which character becomes an extra wild, while an inner wheel displays the number of free spins awarded; initially, it is between 7 and 12. If the player scores two or more scatter symbols anywhere on the reels during bonus free spins, they either receive more free spins, or additional character symbols go wild. These are important, because they make the creation of three extra wild symbols possible during the round, which can send wins rocketing.

The multiplier range (determined by the player’s bet per line at the start) also applies during bonus free spin rounds. Combined with one, two, or even three extra wild symbols, the multipliers make this phase of Hidden Valley video slots potentially the most profitable one for players.