Spartacus, the legendary Thracian leader of the Roman gladiator rebellion of 71 – 73 B.C. is the subject of Spartacus: Gladiator of Rome, an online slot game created by WMS. The game features a total of 100 paylines in an innovative game layout.

This game is the second game to be released containing the unique Colossal Reels feature, which means that 2 reel sets, a 5×4 set and a 5×12 set, are featured in the game. With this feature, any stacked wilds that appear on the 5×4 reel set are copied and transferred to the Colossal Reels, and these wilds will expand to fill the reel when transferred to make more winning combinations.

The bonus features in Spartacus include stacked and transferring wilds, stacking game symbols, a free spins feature and win multipliers of up to 20x the win.

The game is set on a simple backdrop, with the Colossal Reels dominating the screen. The graphics of Spartacus are lifelike and detailed, and the theme of the game is evident in the design of the game. In the top left hand corner is the top of a carved Roman pillar, and the reels are filled with items that relate to the gladiators of Rome, including the lions with which they had to battle and battle gear such as swords, shields and fringed helmets.

On the reels are the playing card suits of hearts, diamonds, clubs and spades, each coloured red, pink, purple and blue, respectively. Additionally, there are gladiator-themed icons of lions, shields, swords, helmets, female gladiators, game logos and Spartacus himself, who is framed by ornate Roman pillars.

The ‘Spartacus’ logo is the game’s wild symbol. This wild substitutes all other game symbols except for the Coliseum scatter symbol. The wild symbol also appears as a stacked wild during both the base game and free spins feature, and is transferred to the Colossal Reels to make further winning combinations. 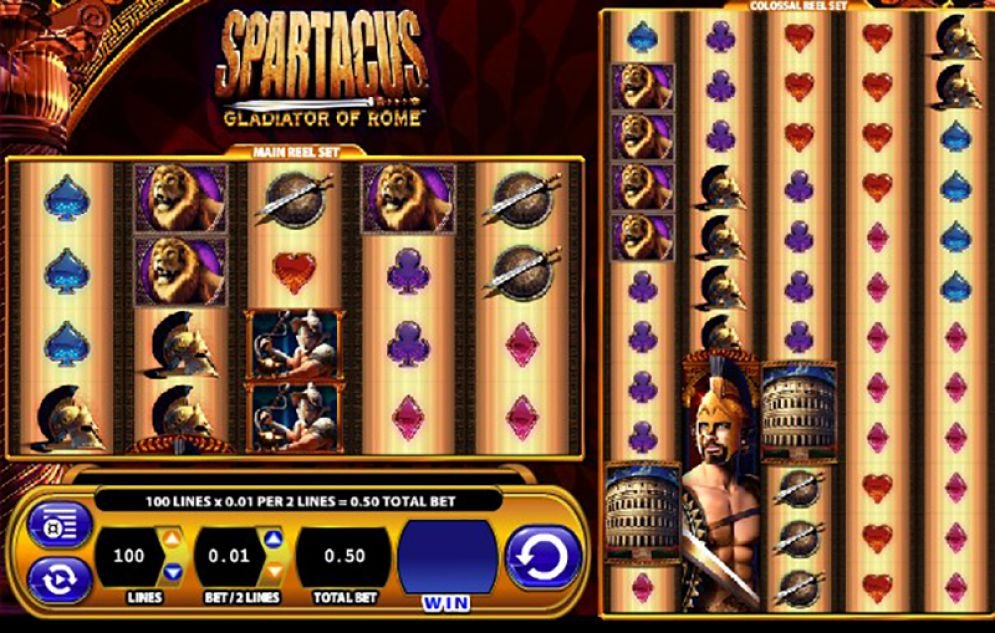 The Coliseum serves as the Spartacus scatter symbol. This scatter symbol only appears on reels 1, 3 and 5 of both the main and Colossal Reel sets. Landing 3 or more of these symbols on either or both reel sets will trigger the free spins feature.

Additionally, during the free spins feature, if part of a stacked wild symbol appears on the main reels, the rest of the stack will be automatically nudged into place on the reel and copied onto the Colossal Reels to create even more winning lines during the feature.