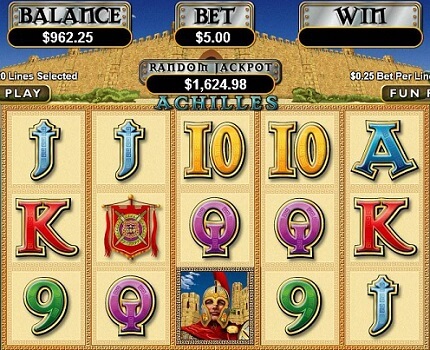 Like most developers, Real Time Gaming, or RTG, has a number of titles that take their themes from ancient Greece. However, Achilles from RTG is one of the few slots that pays attention to the legendary war between Greece and Troy, lost in the mists of history. The five reels, bounded by ornate geometrically decorated borders, are set against the walls of Troy, with the backdrop changing to a sea view during bonus rounds.

Suitably martial music accompanies the action in Achilles, with extra bells and trumpets during the bonus rounds. The five reels display three symbols each, and there are 20 adjustable pay lines. Players can also raise or lower their bets per line, according to the size of their pockets.

Apart from two special symbols, Achilles uses 10 other icons. Six of them are the bog-standard poker symbols 9 to A, but the RTG designers have put a bit of effort into rendering them in boldly coloured faux-Greek symbols. The A and K are matched, winning the same value prizes for identical matches, as are the Q and J and the 10 and 9. Five Ks or As on a pay line win 400 credits.

Invincible Achilles himself is the game’s Wild symbol, decked in his armour and brandishing his sword. Like wilds in many video slots within easy reach here, Achilles has two functions. He can substitute for any icon except the Scatter on a pay line to create a winning combination.

Three Achilles icons in any position will also trigger the Achilles Free Games feature. The player must pick one of the Achilles icons to see how many free games they get: 15, 20 or 25. During this round, all Troy symbols turn into either Achilles or Helen, and all prizes get a X3 multiplier, although the feature cannot be retriggered.

The Achilles Scatter symbol is an icon featuring the Trojan walls. Three or more Troy Scatters in any position win an immediate multiplier of the total stake on the spin: up to 500X for five Scatters.

Three or more Scatters will also trigger the Troy Free Games Bonus, which consists of 10 free spins, with all prizes doubled. However, these free spins can be retriggered during the bonus round. Moreover, both Achilles and Troy icons can make up the trigger in mixed combos, as long as there are at least three in total.

Achilles also has a progressive jackpot, dubbed the Random Jackpot on the screen. It can be triggered at random after any spin; it does not depend on the icons that come up.