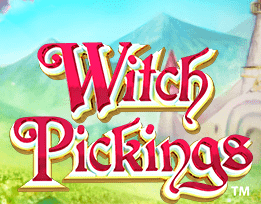 Next Gen Gaming’s Witch Pickings slot steers clear of the grisly potion ingredients, gloomy cellars and evil cackling hags of many other witch-themed online slots titles. Instead, the three witches in the Witch Pickings slot are young, friendly, saucily dressed and beautiful; more the fairy godmother type than the wicked sorceress. To bear this impression out, they each have three different boosts to add to bonus rounds.

The Witch Pickings slot’s light-hearted, fairy-tale air is enhanced by the stately music that plays throughout, and the whimsical fun the designers have had in designing the artwork. In a sunny land where the trees are as pink as the castle domes, a colourful background of mountains, trees, flowers and fungi embrace the five reels in a fine frame of gold and jewels. The whimsy extends to the animations and the game controls, housed in bugs, rocks, leaves and mushrooms at the base of the reels. After each win, the Gamble mushroom pops out from behind the Auto Play mushroom, for instance.

Although the Witch Pickings slot has only four themed symbols, even the six card values, 9 to A, are designed in ornamented calligraphy and glowing colours. A black cat pendant, a potion bottle, a bubbling cauldron and the fairy-tale castle make up the exquisite themed high-value symbols, winning up to 800 credits for five castles on a payline.

Crystal Ball Pays up to 1,000 Credits

An ornate crystal ball glowing with purple energy is the Witch Pickings slot’s Wild, able to replace any ordinary symbols in a combo. The Wild also wins prizes for its own matching sequences on the same payline from Reel 1: up to 1,000 credits for five of a kind.

Like in some iPad casino slots available at https://onlinemobileslots.net/ipad, all 25 of the Witch Pickings slot paylines are fixed, so the game controls simplify matters by allowing the player to simply pick a total bet per spin: between 0.80 and 80.00. Working magic together, the three witches form the Witch Pickings slot’s Scatter icon. Scatters pay the player a bonus prize of 50X, 100X, 250X or 625X the entire bet on the spin for matches of two, three, four or five in any windows. Three or more Scatters also trigger a bonus round of 5 free spins, and this is where each of the three witches comes into her own.

Before the Witch Pickings slot free spins round commences, the player must choose one gift from each of the witches. The blonde witch in blue offers Symbols the Same, which picks one of the high-value icons at random and transforms all high-value icons into that symbol for the duration of the bonus, Symbols Stacked, which transforms one of the high-value symbols into permanent stacks for the free spins, or Symbol Prizes, which assigns random values between 25 and 500 credits to a specific high-value icon, and pays those prizes every time that symbol appears.

The brunette witch in red offers Expanding Wilds, which fill the whole reel each time they appear, Extra Wilds added to all the reels, or a Wild Multiplier set between X2 and X10. The redheaded witch in green can give the player an All Wins Multiplier, which increases all wins by a factor of between X2 and X5, the Pays Both Ways, which allows combos during the bonus game to form left-to-right as well as right-to-left, or the Extra Free Games boost, which adds 5 free spins to the round.